I use gun servitors a lot in our games of Rogue Trader and Dark Heresy and have always eyed up the old gun servitor models on offer on ebay, but could never justify forking out a tenner for a single model, given I would need quite a few.

As our Callowdecks campaign has got into full swing, my own personal Orlock gang has been saving up its pennies to pick up one of the ‘Lugger’ Servitor Brutes that is available to them. 3+ armour save from the front, 3 Wounds, Toughness 5 and can move and shoot with a Heavy Bolter? Sign me up!

The brief had become clear – build me an army of robo-friends worthy of Mordor. They needed to be suitable for use across multiple systems, so different weapon configurations were a must, and one of them needed to have a heavy bolter. Easy peasy! 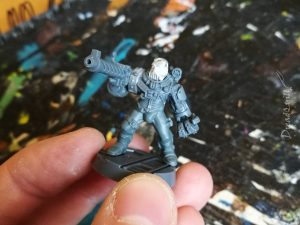 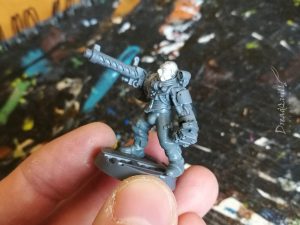 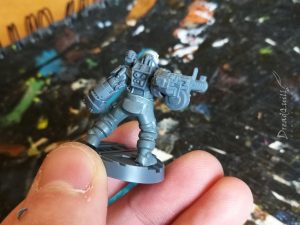 Assembling the smaller servitors was fun – the heads were from Pig Iron miniatures from an old Dark Heresy project I had lying around, suitably grotesque but with their faces largely covered. The bodies were from the Genestealer Neophytes kit, and the legs donated from some old plastic Space Marine scouts with the pouches shaved down.

This first lad was given a heavy stubber from the Orlock kit, which with a bit of random circular plastic I had lying in my bits box, made the perfect cowling to glue the weapon straight onto the arm socket. 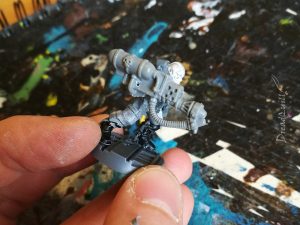 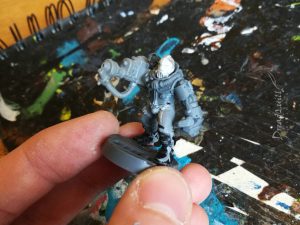 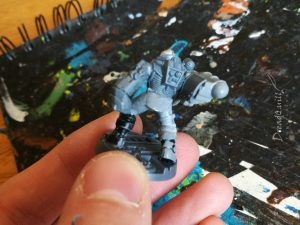 The next one build used a piece I’ve had in my bits box since I first started the hobby waaaaay back in the 7th Century. I have a lot of weird sponson weapons from old plastic vehicle kits that never fit on anything other than vehicles, or in this case, boopy robo-friends.

Flamers are great fun and dangerous to PCs regardless of what system you’re using. 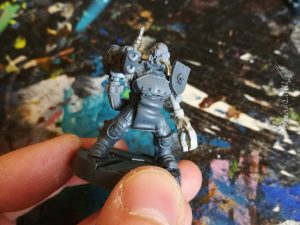 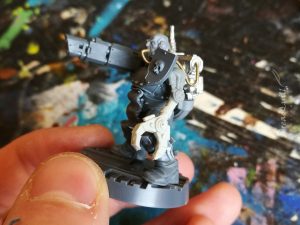 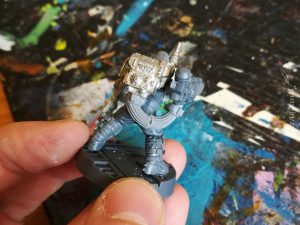 I also wanted to build some slightly larger servitors, partially for variety, partially because I’d run out of scout legs, partially because I’d seen someone make them out of Goliath parts and I happened to have to spare in my bits box. They would make good military-grade war-bots rather than your run-of-the-mill civilian grade, plus sticking a heavy bolter to the side of those Neophyte bodies would be hilarious but woefully lopsided.

I had some bits from a vehicle project I’m working on, the heavy fusion repeating hellgun hot-shot volley-gun thing from the side of a Taurox. It is helpfully completely absent from the 40kRPG lines regarding rules, and it’s still a (relatively) new addition to the traditional Imperial armoury, so its silhouette is not as recognisable as, say, a lascannon. This would give me free reign to upscale it or downscale it depending on the encounter without someone going “why is that shooting like a lascannon when it’s clearly a lasgun” 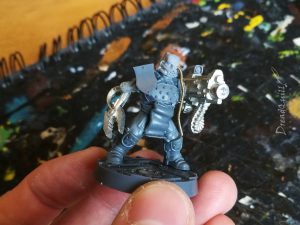 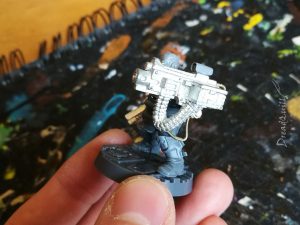 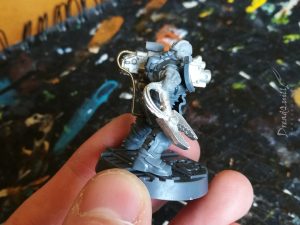 In awe of the size of this lad. The final servitor would be the one (hopefully) attached to my Orlock gang. They got some extra heraldry odds and ends to cover up the worst of the Goliath furnace plating and give them a bit of extra bulk.

This head was from the classic Space Marine tactical squad, the bionics made from a combination of Anvil Industry bionic parts and odds and ends from my bits box. The heavy bolter, again, from a weapon mount for a vehicle – this time the pintle heavy bolter from the sidecar of a Space Marine attack bike with the stand snipped off. Some little bits of guitar wire as cabling rounded them off quite nicely.

I’m very happy with how they’ve all turned out, to the point where I wished I’d made another 8 for a full gamut of robo-lads. I’ve been staring intently at some ebay lots going soon, but those kinds of projects will have to wait til after Christmas I think. 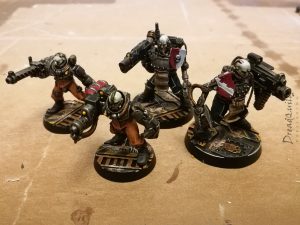 And in a sneaky sneaky preview, here’s a quick snap of the lads all painted up. I’ll get some better pictures up once I’ve had an opportunity to snap them in daylight!