Last week was Respite (so no Mercy Crier), earning our gangs valuable time to recover their fighters and consolidate their earnings. A much needed break in the conflict for some and a teeth-gnashing stay of hand for others.

The gangs have split into three broad groups, owing to a combination of bad luck and real world commitments. 16th Law and Distilled Mayhem are the forerunners, with the Order and the Inheritors placing in the middle of the table. Next week’s event should even the scores out a little… 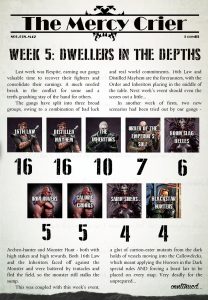 In another week of firsts, two new scenarios had been tried out by our gangs – Archeo-Hunter and Monster Hunt – both with high stakes and high rewards. Both 16th Law and the Inheritors faced off against the Monster and were battered by tentacles and fled the field, so the monster still stalks the sump.

This was coupled with the week’s event ‘Dwellers in the Depths’, making every scenario very deadly for the unprepared. 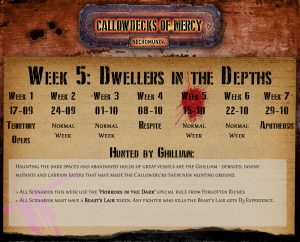 Hunted by Ghilliam: Haunting the dark spaces and abandoned holds of great vessels are the Ghilliam – debased, insane mutants and carrion eaters that have made the Callowdecks their new hunting ground. 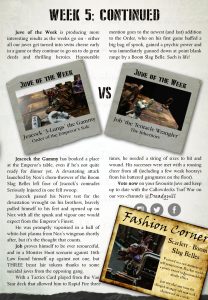 wEEK 5 JUVE OF THE WEEK

Juve of the Week is producing more interesting results as the weeks go on – either all our juves get turned into Swiss cheese early in a game or they continue to go on to do great deeds and thrilling heroics.

Honourable mention goes to the newest (and last) addition to the Order, who on his first game huffed a big bag of Spook, gained a psychic power and was immediately gunned down at point blank range by a Boom Slag Belle. Such is life!

Jeacock the Gammy has booked a place at the Emperor’s table, even if he’s not quite ready for dinner yet. A devastating attack launched by Nox’s chem-thrower of the Boom Slag Belles left four of Jeacock’s comrades seriously injured in one fell swoop.

Jeacock passed his Nerve test for the devastation wrought on his brothers, bravely pulled himself to his feet and opened up on Nox with all the spunk and vigour one would expect from the Emperor’s Finest.

He was promptly vaporised in a ball of white-hot plasma from Nox’s wingman shortly afterwards, but it’s the thought that counts.

Job of the Inheritors proves himself to be ever resourceful, and in a Monster Hunt scenario against 16th Law found himself up against not one but THREE Beast Lair tokens thanks to some suicidal juves from the opposing gang.

With a Tactics Card played from the Van Saar deck that allowed him to Rapid Fire three times, he needed a string of sixes to hit and wound. His successes were met with a rousing cheer from all (including a few weak hoorays from his battered gangmates on the floor).

This week is the Leader of the Boom Slag Belles – Scarlett. She is pictured here in a rare moment of self preservation, firing her combi-bolter/needle rifle at foes from a comfortable piece of cover.

In a practically guaranteed act of victory, in a Spook Harvest scenario she charged down the Cardinal of the Order, expecting to slice him to ribbons with her power sword. It didn’t quite go her way, and a duff set of rolls meant Scarlett sat the rest of the game out, nursing her ego and wondering where it all went wrong. 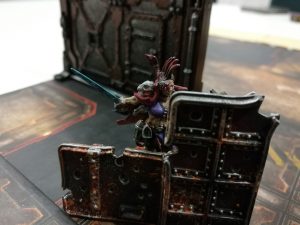 The Inheritors and 16th Law locked horns in a Monster Hunt scenario, neither walking away with the prize. The Order joined in next, with a three-way for control of a vault in Archeo Hunter.

The Order and Boom Slag Belles faced off in a Spook Harvest scenario, with the Inheritors and Distilled Mayhem facing off in a Shoot Out to round off the week.

Inheritors vs Distilled Mayhem – shoot out

Facing off down a creepy corridor of the Callowdecks, six gang members and one cybermastiff locked eyes and prepared to draw.

The Inheritors and their humiliated ganger were quick to go for their guns, but the liquor fueled the men of Mayhem to get the first shots off. 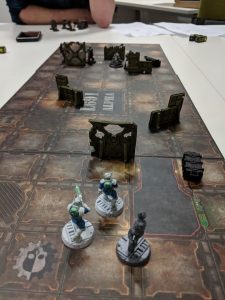 The Inheritors had a fairly easy start to the showdown, pinning all of the opposition and wounding the cybermastiff, but the wily pooch quickly recovered from its flesh wound and bore down on the Van Saars as grenades rattled and rumbled throughout the corridor.

The Inheritors were quickly forced to pull back when the vicious bite of the cybermastiff took out one of their gang, effectively leaving them outnumbered two to one. 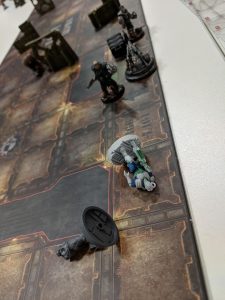 Lacking the means to go on under the weight of numbers, they scattered into the night whilst the members of Distilled Mayhem stood victorious, gaining massive reputation.

The Inheritors gained one reputation while Distilled Mayhem cleaned up a cool-keeping five!