What a week! The second Cycle has come to a close and we’ve seen over twice as many gang skirmishes in the Callowdecks as the gangs start to find their feet.

First the sad news – we’ve had to say goodbye to Apocalypts No (for now…) as they will be retiring from the Callowdecks. No doubt we’ll see them again back in the underdecks causing a ruckus in no time.

We’ve also welcomed a fresh Orlock gang to the campaign – Distilled Mayhem! They have blasting charges coming out of their ears, and as the Calorie Crooks can attest to, they’re not to be taken lightly… 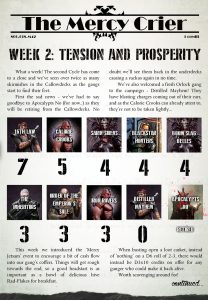 This week we introduce the Mercy Jetsam event to encourage a bit of cash flow into our gang’s coffers. Things will get rough towards the end of the Turf War, so a good headstart is as important as a bowl of delicious hive Rad Flakes for breakfast.

The Callowdecks are ripe with abandoned cargo ready for the picking. When opening a Loot Casket, replace the “2-3: Nothing useful” result with:

2-3: Forgotten Cargo: The casket contains D3x10 Credits that is added to your Stash if the fighter is not abandoned or captured during the game.

You can’t transfer cash between fighters either – your gangers are far too protective of their ill-gotten gains to do so in the heat of battle.

week 1 Juve of the Week results 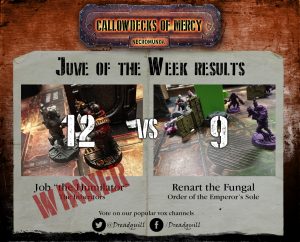 Last week’s vote was close but Job ‘the Humiliator’ came out on top, earning the Inheritors 30 Credits for his valour. The votes were close and different on both Twitter and Facebook, but after compiling them both, Job pinched it by just a handful of votes, so don’t forget to vote for fave on both channels!

Week 2 Juve of the week nominations

Juve of the Week had a lot of incredible potentials, but was tempered by most of the heroic (or foolhardy) deeds being carried out by mere gangers instead of our handsome Juves.

As one of the gangs this week is the Dreadquill house gang, if that entrant is picked by you (the illustrious and intelligent public), those winnings will be donated to FLOW-MATIC’s victims instead – the Boom Slag Belles. 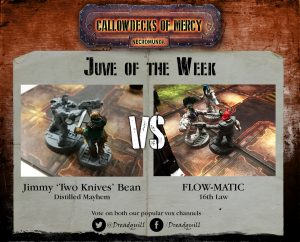 Jimmy ‘Two Knives’ Bean proved the adage that a man with two knives must be pretty happy. In his inaugural match, he faced down the bolter-wielding Goliath that had been engaged in a shooting match with the Orlock leader for much of the match.

FLOW-MATIC beat all odds, killing a Champion with a reaction attack, then chasing down and beating up a plasma-pistol wielding Escher all with a length of motorcycle chain and all in the same turn.

And finally, last call at the bar! The Distilled Mayhem are a pack of mad moonshiners who are ready to fling a deadly blasting charge Molotov your way at a moment’s notice, filled with double measures of their signature product.

Glenfiddich, Jack Daniels and the (in)famous Grouse here have heard about the party going on down in the depths of Mercy and are ready to bring some extra kick to the already volatile mixer. 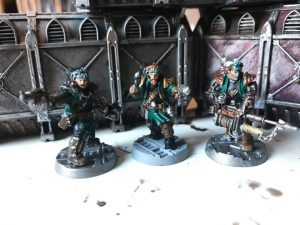 As we have too many games to squeeze into a single Mercy Crier, we’ve got some highlights for you from other games played throughout the week.

A hard fought (and many mistakes) Forgotten Riches match between two new and upcoming gangs.

Both players got to field their entire gangs, 7 Iron Rovers and 8 Boom Slag Belles.

Perhaps the fastest game we’ve seen so far – in the first activation of a ‘Fighter Down’ scenario, the Blackstar Hunters’ Champion curb stomps the downed ganger and ends the match. 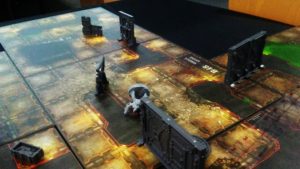 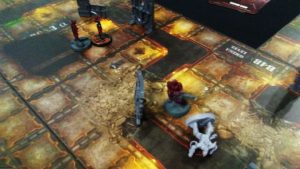 Iron Rovers vs Sarin Sirens and The Inheritors

Our first multiplayer match of the Turf War! We played the Ambush scenario, with the Iron Rovers being ambushed by an alliance of Van Saar and Escher. The Iron rovers had also picked up a hired gun to draw some flak away from the bulk of their force. 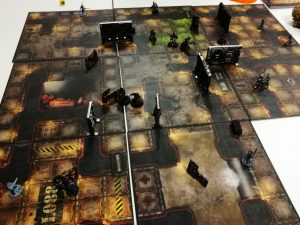 The Alliance set up defensively, expecting the Iron Rovers to try and push aggressively through. The Goliath team instead used their Juve and Hired Gun as a screen to retreat the bulk of their gang early on, prompting the Alliance team to switch tactics. 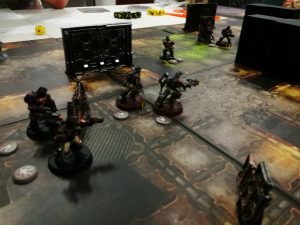 With clever use of frag traps to deny the Inheritors easy access to their escape, much of the Iron Rovers had moved to within scoring distance.

Their nature got the better of them, and they tried to score some easy points on some lingering Escher gangers before retreating. 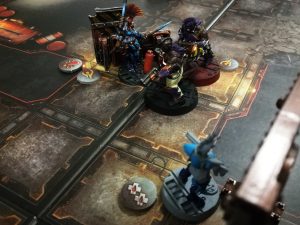 In the most tragic group melee we’ve seen so far, one of the Sirens fired acid shells into combat, setting her (new) Leader on fire. The Goliath fighters managed to somehow avoid killing the helpless flaming Escher for several until they finally managed to bring in their chem-thrower from across the map to douse him in delicious chemicals.

By this point, the Juve had been shot in the back by Van Saar gunners and the ganger had acquired 3 Flesh Wounds from simply refusing to die. The chem-thrower rolled a Memorable Death for the ganger as he turned completely inside out.

It was a victory to the Alliance, but by a hair’s breadth.

One Reply to “Mercy Crier week 2: Tension and Prosperity”