Thrills, spills and grav-gun kills in the opening week of the Callowdecks Turf War! In no less than seven different altercations and five ganger deaths already, including a Leader (RIP Jett), the gangs have set a precedent that others will be hard pressed to match.

With this week being the opening week, the gangs have been tentatively finding their feet and probing other gangs for weakness.

Only two gangs saw their Turf Size increase – 16th Law and Calorie Crooks, but what really matters is their Gang Reputation. Here’s a look at the leaderboard so far: 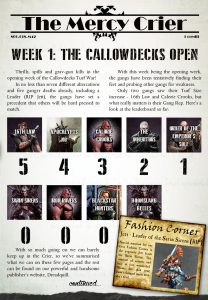 Special mention for our first Fashion Corner is the exquisite Jett from the Sarin Sirens, painted by Catherine Williams of Hobgoblin3D. The contrast of armour and hair is just wonderful. Shame her skin tone hasn’t changed much now she’s died…

Juve of the week

Our first regular Juve of the Week is an opportunity for Juvies to earn their salt performing for you, the illustrious readers of the Mercy Crier. Our glorious benefactors at Dreadquill have released 30 Credits PER WEEK to give to one lucky Juve who has baffled, astounded or inspired undiscovered feelings of gang loyalty among you, the public. 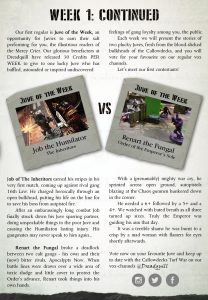 Each week we will present the stories of two plucky Juves, fresh from the blood-slicked bulkheads of the Callowdecks, and you will vote for your favourite on our regular vox channels.

Job of the Inheritors earned his stripes in his very first match, coming up against rival gang 16th Law. He charged heroically through an open bulkhead, putting his life on the line to save his boss from autopistol fire.

After an embarrassingly long combat Job finally struck down his Juve sparring partner, doing unspeakable things to the poor Juve and causing the Humiliation lasting injury. His gangmates may never speak to him again…

You can see the full battle report here.

Renart the Fungal broke a deadlock between two cult gangs – his own and their (now) bitter rivals, Apocalypts No. When battle lines were drawn over a wide area of toxic sludge and little cover to protect the Order’s advance, Renart took things into his own hands.

With a (presumably) mighty war cry, he sprinted across open ground, autopistols blazing at the Chaos gunmen hunkered down in the corner.

He needed a 6+ followed by a 5+ and a 4+. We watched with bated breath as all three turned up sixes. Truly the Emperor was guiding his aim that day.

It was a terrible shame he was burnt to a crisp by a mad woman with flamers for eyes shortly afterwards.

As we have too many games to squeeze into a single Mercy Crier, we’ve got some highlights for you from other games played throughout the week.

Apocalpyts No vs The Order of the Emperor’s Sole

16th law vs Apocalypts no