From the viewport you can see Syracuse in the distance – a concentration of pinpricks of light in the infinite darkness. It draws vessels from far and wide like moths to a flame. The skies around the planet are polluted with starships of all sizes and classes, from the mighty warships of the Imperial Navy on patrol outside their home dock of Port Sempect, to the bloated Universe-class mega-haulers carrying a world’s wealth of resources and people, to the smaller system ships scuttling about carrying precious cargo between the planets.

Syracuse is a sight to behold. Visible long before you can make out its details, half the planet is shrouded in utter darkness, the other half in burning sunlight. Tidally locked, the planet orbits the Tangenian sun perfectly in time with its own axis spin. Only a thin strip of habitable space runs the equator of the planet from pole to pole, and every inch is covered with a sprawling hive cities

Haloing the planet is a broken ring of drydocks, ports, loading yards, warehouses, space stations and detritus. Syracuse once boasted a proud, unbroken run of orbital docks, but these days it is mostly abandoned, fractured and isolated, left to the devices of scavengers, pirates and reclaimators. 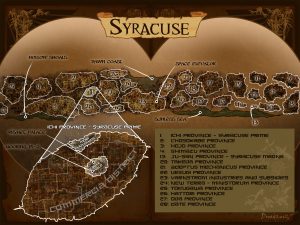 Our new Dark Heresy campaign begins in earnest, set on the twilight ringworld of Syracuse. As an oft-mentioned place and the capital planet of the Onus Region, Syracuse needed a map worthy of its stature – not just for this Dark Heresy game but also for any future games I choose to set on the planet. I needed a map that was not only informative, but robust enough to be used in the future with little or no editing.

The entire process was recorded and sped up, in the first illustration timelapse Dreadquill has produced to date. A lot was learned on the technical side of things, but the biggest one being: do a test recording before starting a four-hour drawing process. As a result, we get this weird artifact in the middle of the screen, so apologies for that.

The process started with a hastily scribbled map on some lined paper made on a late-night Megabus journey. I’m a big fan of the Total War series, and I drew a lot on my 300+ hours of Shogun 2, a strategy game set in the Sengoku Jidai, or Warring States period of Japanese history. I had a lovely framework to balance powerful households, civil strife and interesting factions without needing too much legwork up front.

The planet is covered in a strip of hive cities, joined together by fields of slums, so the whole map was only ever going to be a straight line rather than a series of continents, so that made the planning a little easier. I didn’t have too many requirements for what needed to be present either; I needed a ‘Province 13’ for setting the spooky campaign in and I needed a ‘Province Prime’ to introduce the planet at its most opulent, to meet the Inquisitor in, and to build the Kismet Palace – the seat of Inquisitorial power in the region.

I thought it would be interesting if the different major households had suzerain status over different provinces, swearing fealty to an independent province (Prime) where their Imperial overlords were set. This had the potential to set up lovely clandestine operations against different houses and cold wars bubbling over into direct border violence in the slum areas.

As a side note; the campaign is based loosely on one of the written campaigns and astute readers may pick it up, so please try not to spoil it for my players in the comments!

I also needed to emphasize the isolation of Province 13. It is one of the last independent provinces left on Syracuse, and slap bang in the middle of the destroyed, desolate and abandoned provinces ravaged by thousands of years of civil war and neglect.

Province 13, or Syracuse Magna, are fiercely independent despite having no exports or being capable of raising tithes or contributing to the planetary defense force. It is run by utterly corrupt, self-serving nobles who have ruled for generations, and there is no limit to how low they will stoop to claw on to whatever fleeting power and wealth they have left.

The concentration of the sprawl of slums between the provinces begins to thin out the closer you get to Syracuse Magna, roughly on the opposite side of the planet. I enjoy little details like this in maps, as it serves not only as wordless world-building, but also as a valid in-game reason as to why the players can’t just ‘pop out’ to get some help from nearby neighbours. Isolation is the theme of the campaign, after all!

I am very pleased with how the map turned out, and although I learned a lot from the timelapse process I think with all the technical difficulties I had assembling it, very few of them are noticeable in the final cut. Huge thanks to my old chum Frazer Merrick for the sound too, go check his stuff out and throw money at him.

Syracuse Magna has been my most ambitious project to date, with three factions planned for models (The Undertow, the Ash Garrison Enforcers and the at-time-of-writing-unseen Arbites) AND a gaming board, it’s going to be a busy few months for me!