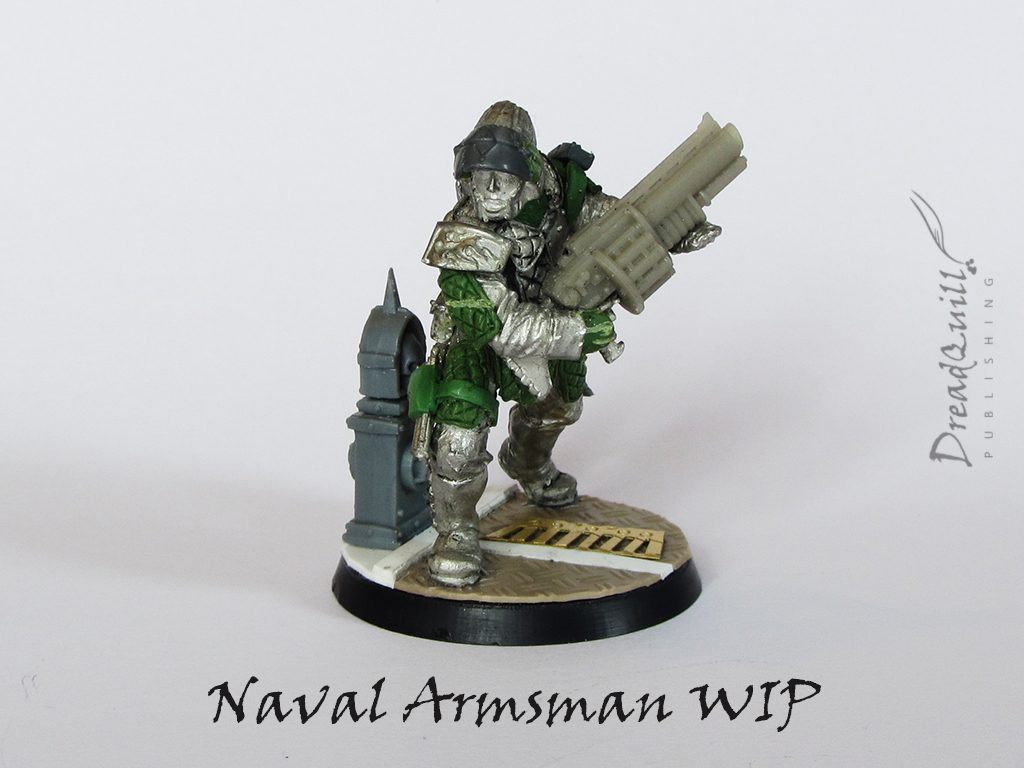 Sulphia Caliver, known simply as ‘Sulph’ to her comrades, is a veteran naval armsman sworn to serve the Yule Dynasty, an ancient and powerful Rogue Trader Household that has close ties with the Inquisition. She has served the Warrant Holder for many years, earning her trust and a place on her personal retinue when House Yule is called to serve the Emperor at the behest of the Inquisition.

She is a brute of a woman, decked out in heavy flak armour and carrying weapons that reflect who she is – vicious, reliable and heavy duty. In the confines of cramped voidship corridors and boarding gangways, you don’t need complex fighting styles or fancy weapons to win the day – simply cold steel and a strong fighting arm.

The model started out life more as a guardsman, a simple kitbash with Sergeant Stone’s legs and Slick Devlan’s body. Back then she was a he, and he was equipped with a standard lasgun and the infamous shouty head of Sergeant Black. He was only bluetacked together, but there was something about the pose of a flak-armoured warrior barreling forwards that really appealed to me. There was a ‘leader’ assembled as well, reaching for a sword and wearing a very fancy bicorn hat, but that will be a MOTB for another time. I liked the momentum of the model, but I never had any motivation to do anything extra to him, and he sat in my Box of Shame for months.

Roll forward to the (relatively) present day, and this lot on ebay comes to my attention. It seems in my brief 54mm hiatus, 3D printing kicked off and suddenly my niche modelling hobby was being bolstered by fresh kits and awesome new weapons. You can get the full Dreadquill run-down of the kit here.

Fawning over the new weapons I was formulating all manner of impossible projects, when I surreptitiously pulled out a few old projects from the Box of Shame and dry-fitted some of the guns. The one that was eventually used is, to my understanding, intended to be a grenade launcher, but one of my friends asked if it was some kind of giant shotgun, and that turned the whole narrative on its head. 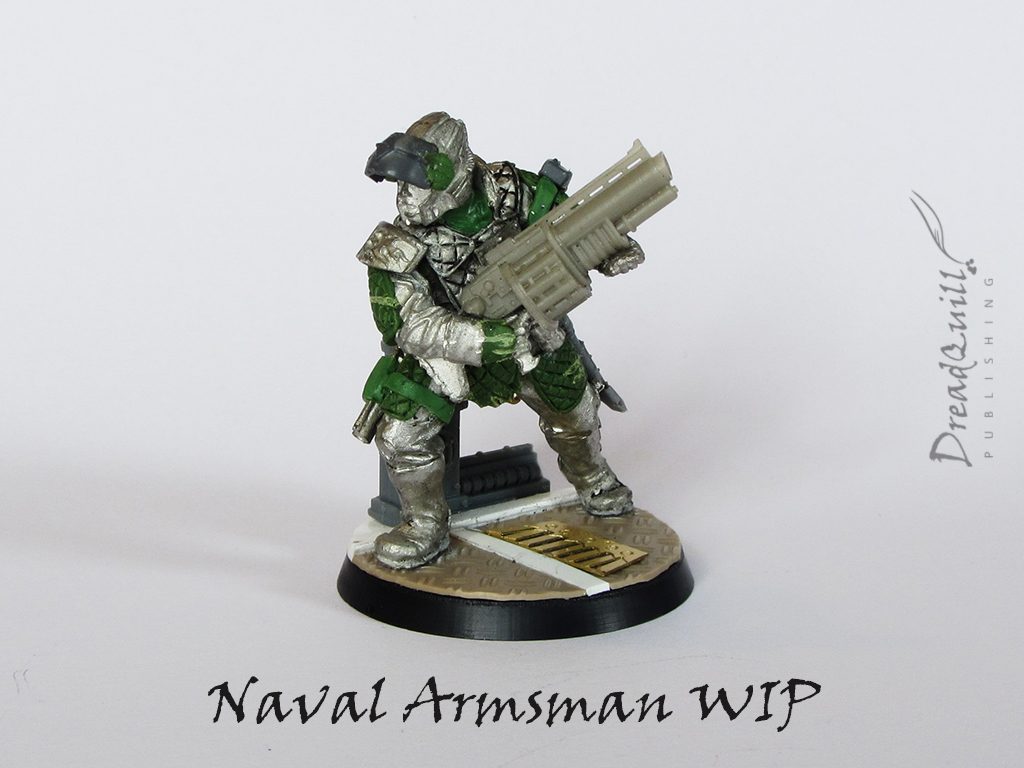 Shotcannons are described as much larger variants of a regular shotgun that fire a huge shell (nearly twice the normal size) and can lay waste to large hordes of attackers. They are considered ‘support’ weapons in boarding parties, and I couldn’t think of anything cooler or more appropriate for an Inquisitor character, someone who specialises in brutal boarding actions and carries a gun that can explode a man into a burst of shredded clothing and flesh. What more could a girl want?

With the new angle of ‘naval armsman’ rather than generic guardsman or bodyguard, the project motored ahead. First thing to change was the head, the shouty guardsman head wouldn’t cut it. I had an old open-faced head from the Lucretia Bravus model, one that I’ve never actually used in a model. I didn’t really like the silhouette, it was too sleek and elegant, a far cry from the chunky combat of the 41st millennium. It looked perfect on her though, and I imagined some kind of huge welding-mask-type shutter being propped open that she could slam down when it was Go Time. 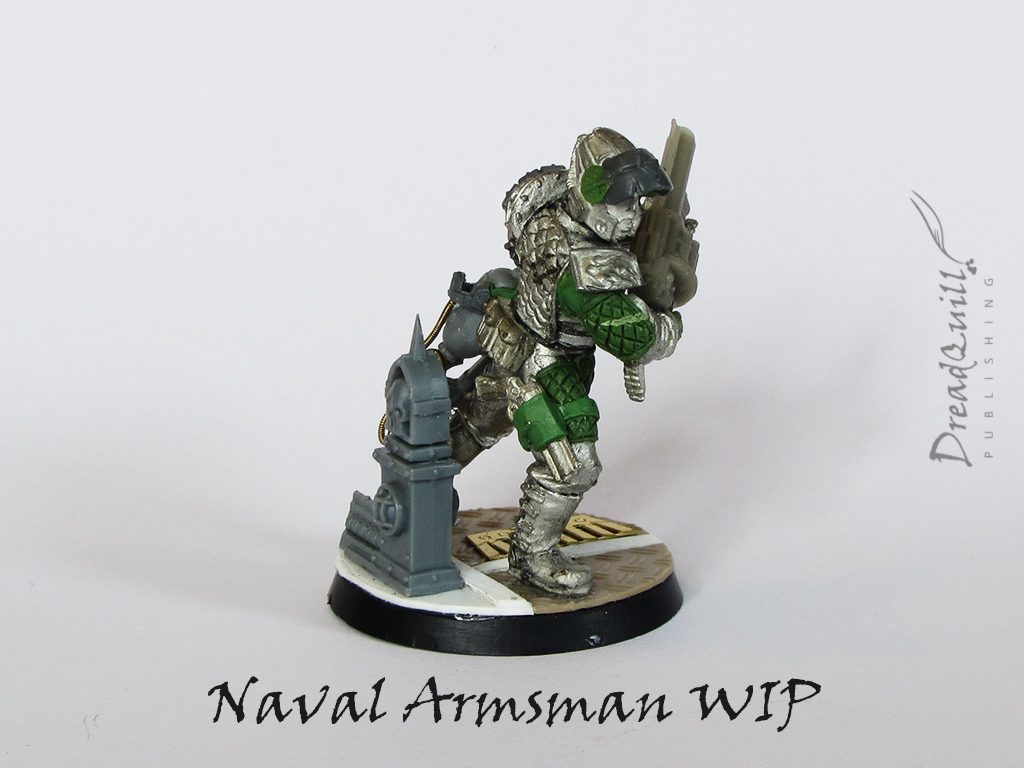 The armour was a joy to sculpt. I’ve always been a fan of the Elysian Drop Troopers, and the padded fatigues on their arms and legs was an aesthetic I wanted to replicate. I tried to keep the size of the pads as close to the flak armour on the body to bring the parts of the model together to look a more coherent whole, like it was an actual uniform that had been repaired a number of times rather than a disparate series of armour plates slapped together.

All the accessories were umm’d and ahh’d over for quite some time. She needed at least one melee weapon, and I felt an axe or mace would be suitably savage. No fancy sword fighting nonsense here. I settled on a chaos marauder axe head and shaft, with the handle being replaced from a 40k power sword to give it a bit more of a futuristic feel, rather than wrapped leather.

There was a toss-up between backup weapons too, I felt compelled to try and give her a reload for her shotcannon but a) I couldn’t find a suitable part to represent a whole new drum mag and b) didn’t feel it was in her aesthetic to reload such a bulky weapon. I see her firing off as many rounds as she can before closing with the enemy, hurling the thing like an angry fire extinguisher and getting stuck in with axe and boot. A nice big revolver strapped to her thigh would fit the bill of backup weapon. 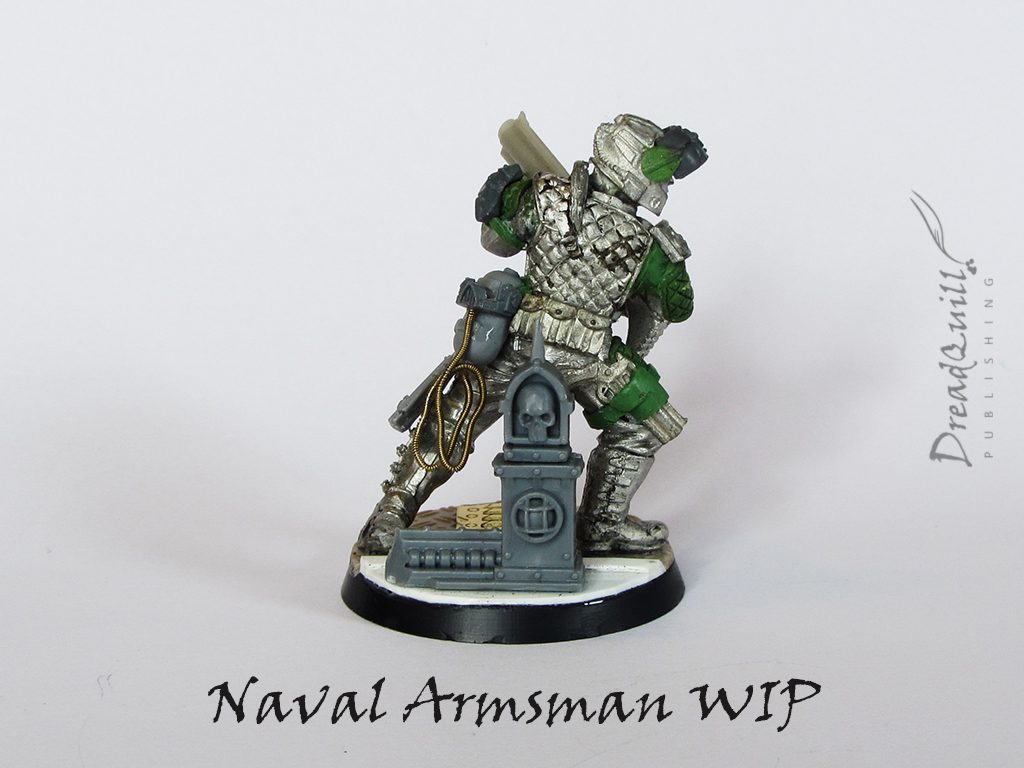 The last key element I wanted for her was a fully sealed combat suit. Her attire doesn’t scream ‘space suit’, but I wanted there to be some way of her surviving emergency decompression, low oxygen or chemical warfare. Her gear is primitive but robust, so she would need suitable breathing apparatus reflective of that. The original plan was to have a mouthpiece attached to her chest or breast, like Forest Whittaker’s character in Rogue One, so she could quickly mask up in the event of an emergency.

At this point though, her arms and gun were well attached to her body, and I could find no way of making a suitable mask to hang from that part of her without it looking cluttered and ugly. I had a root around in my bits box and salvaged an Imperial Guard flamer tank, some guitar wire and a heavily shaved-down 40k space marine helmet to form a rebreather. I figured she would unhook it from her belt and clip it into place underneath her boarding mask to form a fully sealed helmet. It won’t help you with any space walks, but it might just help you survive long enough in a pinch.

Then it was just adding gubbins – a few pouches here and there, a grenade on the belt and sculpting in some straps to attach it all together and she was done! The name is from an idea that on her ship of birth, the ship’s macrocannons were independently operated by different family units, each competing to who can have the faster loading solutions and fiercely protective of their family’s cannon. Each family unit would have names derived from ancient Terran warfare; Caliver, Bulletson, Sabot and Saker. 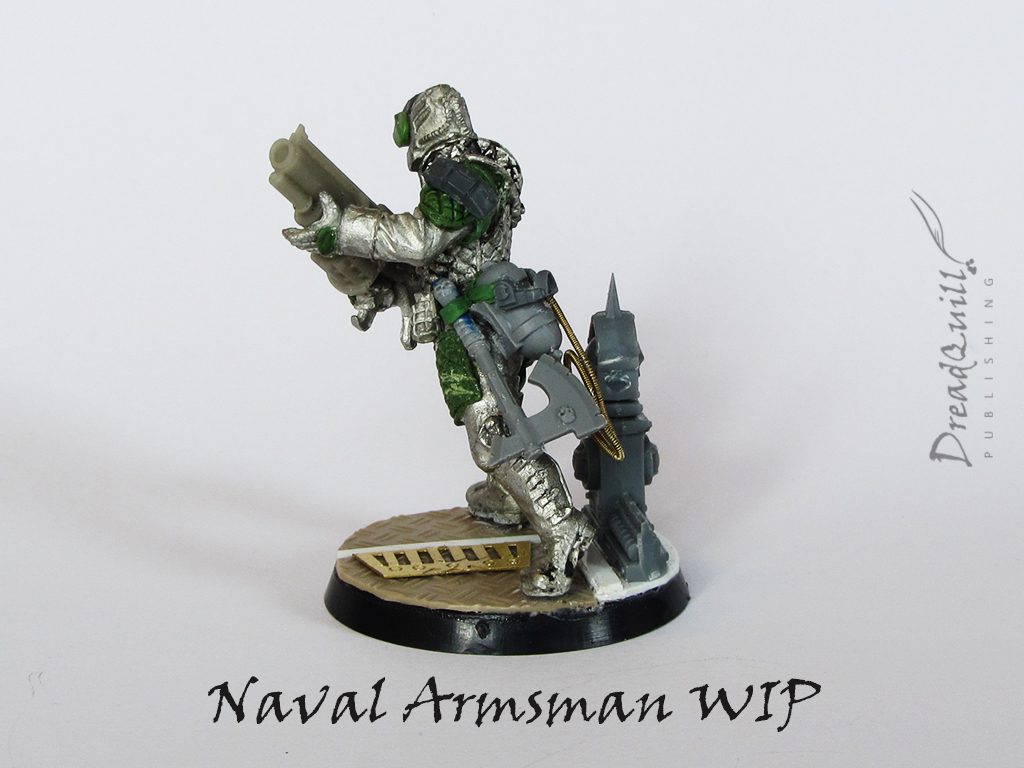 All that’s left is to come up with a colour scheme and mock up some stats for her. A full study will inevitably come along in the future, but my mind went wandering about how best to represent her signature weapon on the Inquisitor battlefield; the naval shotcannon.

Many among the Inquisitor community have adopted MarcoSkoll’s quite excellent Revised Inquisitor Armoury, as although the original rules are robust enough to play with ‘out of the box’, almost two decades of playtesting have brought up a few issues of variety and balance of weapons. Marco took it upon himself to rewrite the entire armoury with the benefit of hindsight, community feedback and oodles of weapon knowledge, so ranged weapons all have a distinctive flavour and punch to them.

Having a browse through, I noticed there was an absence of ‘stupid big shotgun designed to turn men into paté’, so I had a go at improvising rules for on one using the options that were available to me.

Using the stats of a full auto combat shotgun, with the large calibre and drum mag upgrades:

The special rules below have been factored into the statline above.

“A very standard loading, a standard shot shell fires a small cloud of lead projectiles at the target. They have poor armour defeating capabilities and the projectiles rapidly disperse, but the effect of multiple projectiles impacting in the same instant can be especially effective against un-armoured or lightly armoured targets”.

*Multiple hits (1 hit per Degree of Success up to a maximum of 3 hits, all to the same location)

A very easy modification to fit, as it’s a simple magazine swap. Weapons which can take this modification are marked with “DM” under the Notes column.

The weapon’s magazine capacity is doubled, Enc is increased by +5, the Reload stat by +1 and the weapon gains the Jam Prone special rule. 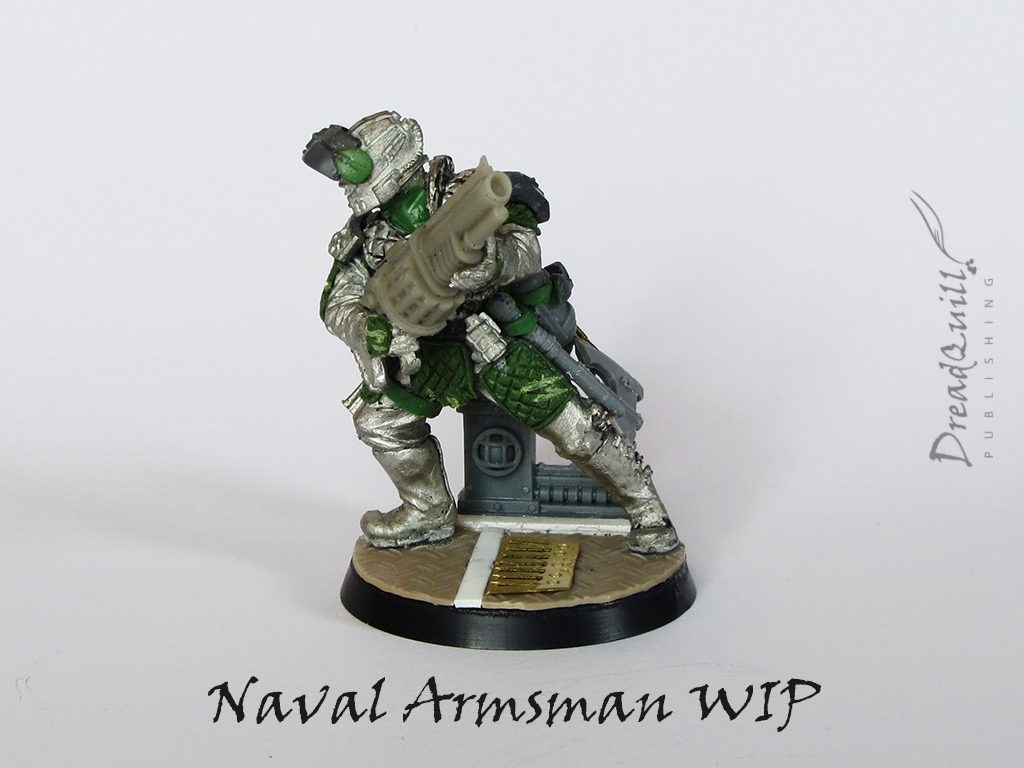