Our games of Rogue Trader often involve group brawls with up to a dozen armed crewmen from our own vessel repelling whatever the eldritch horror of the day has snuck on board and is sucking down our crew like capri-suns. Our captain also has a penchant for giving them names, which never bodes well for redshirts. Rather than use dice as placeholders, I ordered some minis from the very excellent  anvilindustry using their awesome 3d build-a-regiment out of all their parts combos. 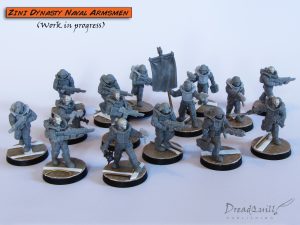 The parts arrived quickly, assembled like a dream and had little to no flash on them at all. I picked up some lady heads from Statuesque Miniatures too, as despite all the praise I can heap on Anvil, they don’t include lady heads as part of their regiment builder. C’mon guys, it’s the 41st millennium here – women are equally expendable as men are.

I didn’t have any real plan in mind for assembly other than I wanted to have a good range of weapon and equipment options so I had a good selection of models to choose from when I needed to improvise something. For example, the Anvil specialist squad I ordered came with a variety of odds and ends, including a banner, medkit and bugle (!). Try as I did, I couldn’t make the bugle work with the scheme. In space, nobody can hear you toot.

This guy stands in as the generic medic – if we have a player go down, he/she will pop up and try and patch them up. Because of the heroic running pose, I figured they would also stand in for any macguffin-carrying NPC who needs to hotfoot the death star plans through the ship. 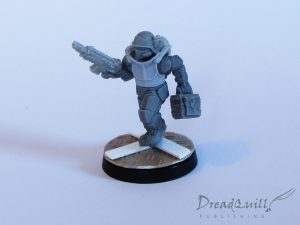 It paired quite nicely with this other specialist, who is carrying a kind of kit bag/satchel charge looking device in one hand, and converted to hold a 40k auspex in the other. I picked one of the Medieval Helmets with a bionic eye to give them an extra techy look and slung a rifle over one shoulder. A little bit of putty for the strap, and this little guy can stand in for any scenario that calls for a specialist, scanner, technical support officer, you name it! 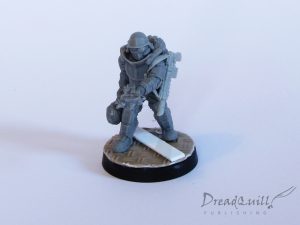 The decision was made quite early on that the armsmen would use las weaponry rather than conventional solid projectile weapons. Firstly, las weaponry would be more robust in harsh void environments – they work just as well in a vacuum as they do in low or zero-G situations, and the ammunition can be recharged theoretically infinitely. Secondly, the Dynasty once made a lot of its money from arms deals with a once-powerful faction of the Adeptus Mechanicus, so the weapons they equipped their troops with generations ago are still functioning just as well (if not better than) modern equipment that would be within a reasonable budget. Why fix what isn’t broken, eh? 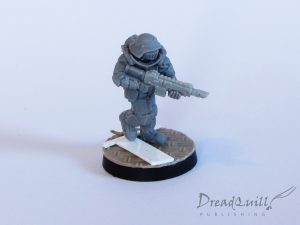 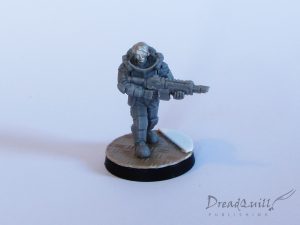 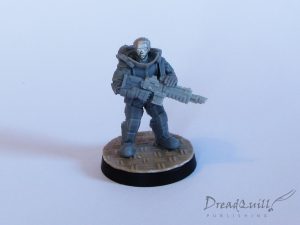 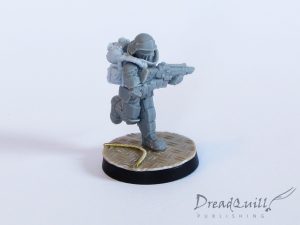 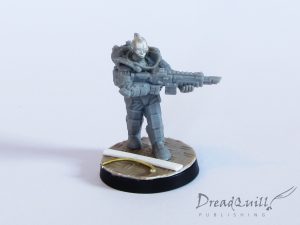 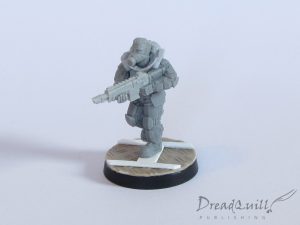 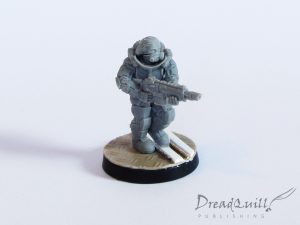 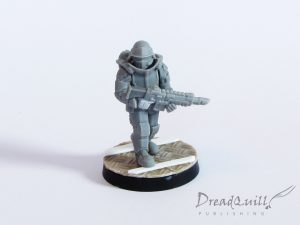 The parts went together with no trouble at all, and there was a huge variety of poses (including a left-handed rifle pose!) that really add to the individuality of the models, despite them wearing 90% the same outfit. It also came with a two-handed pistol pose, which I initially thought was too Operator for our gang of hardened space pirates, but after dry fitting it, realised it was too cool to leave out. A putty strap on the rifle helps cement the model as a ‘rifleman’ class, rather than one of the melee characters. 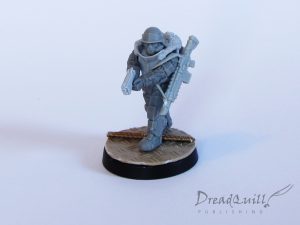 Speaking of melee characters, I also knew I needed a few models that bucked the trend of ‘fashionable space rapscallions’, and given the propensity for boarding actions and angry claw-armed gribblies, we needed a few ruffians in the collection.

I never saw boarding actions as pretty things, but rather grim battles of attrition in tight corridors in hazardous conditions, often with little or no air, gravity or light, so their weapons would need to facilitate that. I was sorely tempted by chain weapons or swords, but settled on some brutish clubs and maces in the end. They didn’t need upkeep or sharpening – a blunt mace is just as effective as a sharp one, and in tricky conditions you don’t want something that you need space to wield (like a sword). 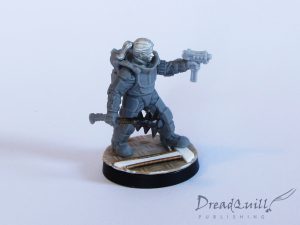 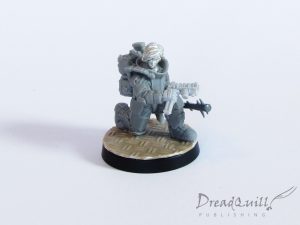 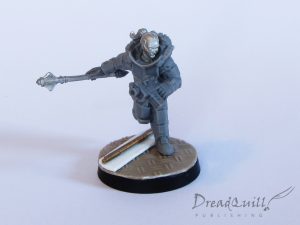 I had enough parts left to build a single armsman, and I was at odds with what to build. My mind wandered back to the idea of the Space Bugler (toot toot) who had some kind of vox receiver built into the instrument and wired into the vox network of all the other armsmen, so they could literally toot in space, but there wasn’t anything in the lore (so far) to back that up yet, and I wanted to cover all my necessary bases before adding new things. Plus, it’s an excuse to buy more minis down the line if I still want to pursue it…

It was a toss up between a leader/sergeant type character and a standard bearer. I hate freehand painting designs onto things, and try and avoid projects that force me to do that to make the most of the minis, so standard bearer was lowest on my priority list. However, I didn’t like the idea of a sergeant for this group, as I wanted leaders to emerge organically rather than be forced upon the crew, or allow the players to nominate anyone they felt was worthy of a position of command rather than the model saying which was in charge.

So, alas, the standard bearer was born. 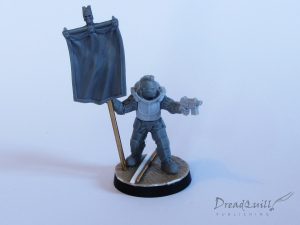 The first test model was completed after much pain and anguish. The Captain of our game picked out the colours and symbols and I did my best to incorporate them into a design. 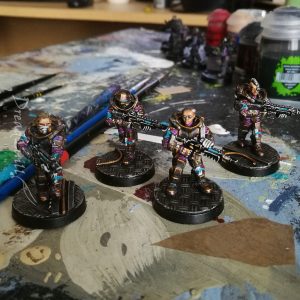 I wanted a House that had been impoverished until recently, so their House Guard are still utilising old armoured space suits that they have tried to repaint and retrofit as a uniform of sorts. The teal armband with the upside down moon is the colour and symbol of the Dynasty, and the red/white kneepad with the teal chevron represents the renewed pact with an old ally, an arms-dealing Adeptus Mechanicus faction.

In their pockets on their backpack they carry handfuls of dirt from their recently reclaimed homeworld, which they scatter on the floor before a boarding action – never again will they allow the Dynasty to lose ground! 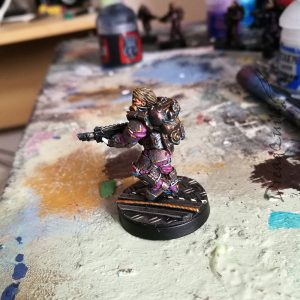 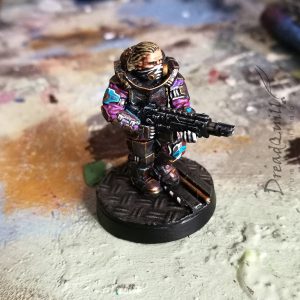 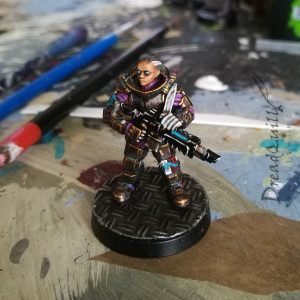 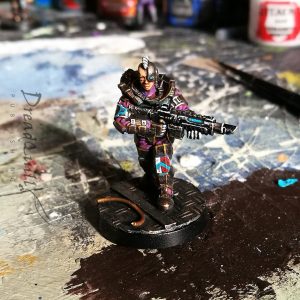 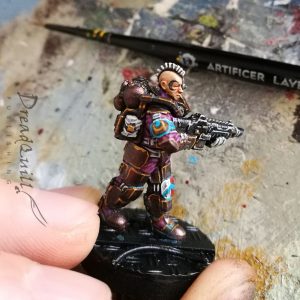 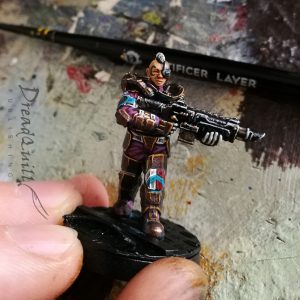